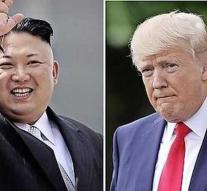 seoul - North Korea has no intention of seeking a rapprochement with the United States during the Winter Games starting Friday in Pyeongchang. That says a senior official of the country against official North Korean news agency KCNA.

Cho Yong Sam, director general of the North Korean Foreign Ministry, says the country 'has never begged for dialogue with the United States and that there is no change,' according to the news agency.