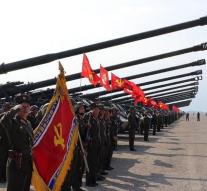 seoul - North Korea says it has held an American since the end of last month because of 'enemy actions.' According to KCNA State Press Office, American Kim Sang Dok was arrested at Pyongyang Airport.

He is accused of 'enemy actions to undermine the country. 'What these actions involve is not clear. According to KCNA, the North Korean justice has begun an investigation.