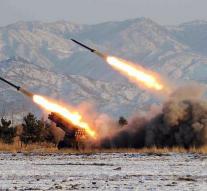 The missiles would have had a range of between five hundred and six hundred kilometers. The Stalinist regime in Pyongyong launched last month, even though several projectiles. That led to strong criticism from the international community.