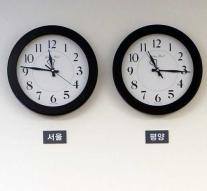 seoul - North Korea will set the clock with neighboring South Korea. That is what media report in North Korea. The new time, thirty minutes earlier, has to start on 5 May. North Korean leader Kim Jong-un would have found it painful to see two different times at the summit with South Korean President Moon Jae.

Last week, the two leaders met. It was the first time since the war that a North Korean leader crossed the border with South Korea.

North Korea plans to close its main site for nuclear testing in May. According to South Korea, that is the first result of the recent summit.