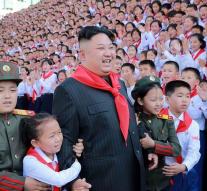 pyongyang/washington - North Korea has attacked US President Donald Trump. Trump conducts a dictatorial policy like Adolf Hitler, wrote the KCNA State Press Office in a main article. The United States's America First policy under the new president is based on Naziism in the 21st century, according to the North Koreans.

The verbal outcome takes place in the context of the conflict between the US and North Korea about the Stalinist-controlled country nuclear weapon and rocket program. The conflict has strongly undermined relations between the two countries in recent times.

Trump repeated Monday's warning to the North Korean regime. According to the American president, the country is a major threat. Probably soon something has to be done, he said in Washington.