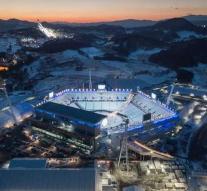 geneva - North Korea has accused the United States of using the Olympic Games as an excuse for even more military presence in the region. But North Korea has 'a powerful and reliable defense' against the Americans. This is what the North Korean ambassador to the United Nations in Geneva, Han Tae song, said during disarmament talks in the Swiss city.

According to Han, Washington is bringing more military equipment to Korea and pretending to be safe for the Olympics. The diplomat called it Tuesday a dangerous act to throw a wet blanket over the current positive atmosphere that characterizes inter-Korean relations. '

Next month are the Olympic Winter Games in South Korean Pyeongchang. Stalinist North Korea has recently agreed to come to the games and the Korea's are running together at the opening and are also one team on a part of the games.