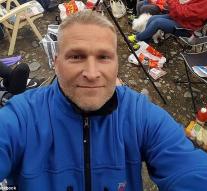 oslo - A Norwegian has complained about a stool from Ikea that he used the shower. To his horror, his testicles were stuck in the holes in the seat of the stool. Claus Jørstad put his complaint stool Marius on the Facebook page of the Swedish company.

He wrote that he could use to deliver only cold water. Ikea responded laconically with the recommendation to remove the handle from the shower or else if necessary to use clothes. Marius in the Netherlands is on sale for 3.99 euros.