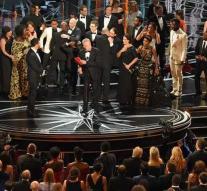 amsterdam - Tuesday afternoon the nominations for the Oscars will be announced. The organization has tightened up the protocols with the dramatic 'enveloppegate' in the memory.

Different names are mentioned in the corridors. In the category of best film Three billboards outside Ebbing, Missouri and Lady Bird are tipped as a contender. A nomination for best actor might end up with Gary Oldman, while Daniel Day-Lewis is also mentioned.

The Academy of Motion Picture Arts and Sciences, together with co-organizer PwC, has in the meantime announced new rules concerning the presentation of the awards. On 4 March, the winners will be announced, and a drama like last year- when presenter Warren Beatty bombed the wrong film as a winner- must be avoided at all costs.

For example, there is now more staff, more checks and better study of what needs to be done if things go wrong again.