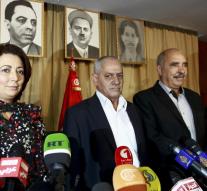 - The awarding of the Nobel Peace Prize to the Tunisian National Dialogue consultative Quartet has a message for the entire region. That said trade unionist Houcine Abassi Friday in a response. Abassi is the leader of one of the parties of the Quartet , the UGTT ( Tunisian General Union of Labour ) . He believes it is an honor for Tunisia , but also hope for the Arab world because it emphasizes the power of negotiation and dialogue .

The autocratic and corrupt regime of President Zine el - Abidine Ben Ali collapsed in early 2011 after violent riots. He had by the end of 1987 until January 2011 in control. The poor North African country of 11 million inhabitants in 2013 seemed to be heading for a bloody mess, like the other countries of the Arab Lente'.

The union UGTT, the employers of the UTICA ( Tunisian Industry Trade and Craft Association ) went to the human Rights Leagues LTDH and the National Bar Association as quartet at the table with their Tunisian polder model to avert the disaster. That has succeeded wonderfully according to the Nobel Committee.