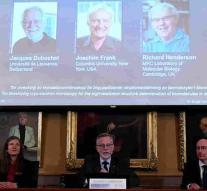 stockholm - The Nobel Prize for Chemistry has gone to three scientists for the development of cryo electron microscopy. The researchers are Jacques Dubochet (Switzerland), Germany-born Joachim Frank (USA) and Richard Henderson (Great Britain). They have developed special applications. The winners were announced in Stockholm on Wednesday.

The researchers have managed to make biomolecules visible in a simpler and better way. The method has brought biochemistry into a new era, finding the Nobel Prize winners.

The trio will be awarded the award on 10 December. The winners receive a total of 9 million Swedish crowns (940,000 euros), a medal and eternal fame.

Since 1901, the Nobel Prize for Chemistry has been awarded to 174 scientists. The Brit Frederick Sanger got him twice. Among the winners were four women, such as Marie Curie in 1911. Last year, Dutch professor Ben Feringa was the (shared) winner for his research into molecules.