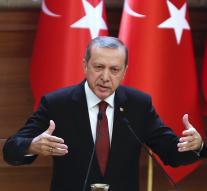 - A summit meeting between Turkish President Recep Tayyip Erdogan and his Russian counterpart Vladimir Putin Tuesday is canceled. A spokesperson of the Kremlin confirmed Monday.

Tensions between the two countries are on since Turkey has brought down a Russian fighter in the border of Turkey and Syria. The summit between the two was already agreed for the incident on 24 November.

Putin calls it a stab in the back to fight jihadists in Syria. He believes that the aircraft did not fly over Turkey. Turkey argues that the unit violated its airspace. Moreover, making the Russians with their air strikes in northwest Syria guilty of ethnic cleansing.

The quarrel leads among other incidents between Russian and Turkish vessels at sea and Russia has imposed economic sanctions against Turkey.