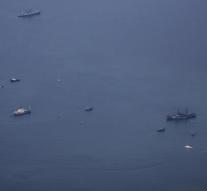 moscow - At wreckage of the Russian military plane that crashed Sunday in the Black Sea are no traces found that indicate an explosion or fire. It has informed the Russian Defense Ministry Thursday, the news agency Tass reported.

The Tupolev-154 crashed shortly after starting down from the Sochi airport. Among the 92 dead were members of a famous army choir that would perform for Russian soldiers in Syria. The Russian authorities suspect that the accident was due to a technical failure or pilot error.