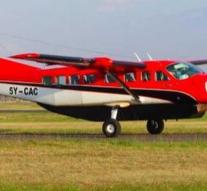 nairobi - The plane that disappeared from the radar in Kenya on Tuesday crashed. None of the ten occupants, including two crew members, survived the disaster. That made airline Fly-SAX known after a rescue team found the plane.

The Cessna had taken off in Kitale in the west of the country and headed for Nairobi. Although a search was started immediately, the wreck was spotted on Thursday morning only in the Abderdare mountain range north of the capital. The disposal action is complicated by the bad weather and the inaccessible area. The cause of the crash is unknown.