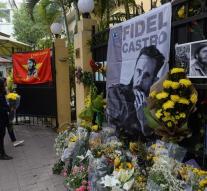 - To counter the cult of the deceased Fidel Castro, there should be no statues come from him or streets and squares to 'El Comandante' be named. That his brother, current President Raul Castro Saturday in Santiago de Cuba said in front of tens of thousands of Cubans.

Before this month will be sent a bill, let Raúl know, which thus responds to his own words to the last wishes of his brother. ' The leader of the revolution rejected any manifestation of a personality cult. ''

The urn with the ashes of Fidel's arrived after traveling through Cuba in Santiago and will be buried Sunday at Santa Ifigenia cemetery, 2.7 kilometers from the barracks where Fidel with a small group of comrades began his revolution in 1953.