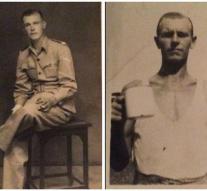 stockport - A 92-year-old British war veteran who fought in the Second World War a way out of a Japanese prisoner of war camp, deserves to have a funeral with many audiences. That call did his cousin Tony Budgett through Facebook, because the veteran has only two living relatives Tuesday be with his cremation ceremony.

Tom Bryan was stationed in what was then Burma (Myanmar), where he was captured. Only decades later he could talk about the horrors he had witnessed. " closed Encircled and weeks they fought their way out, often in hand-to-hand combat, as they caught and killed Allies found whose tortured bodies were left behind ", wrote Budgett. " I ask all of you to forward this to anyone who has served or who lives near Stockport and wants to express his respect for a man who was profoundly changed by his experiences in the war. " Hundreds of people have since announced that they will attend the cremation. (function (d, s, id) {var js, fis = d getElementsByTagName (s) [0];. if (d getElementById (id)) return;. js = d createElement (s). js id = id.,. js src = "// connect facebook net / en_GB / sdk js # XFBML = 1 & version = v2 3..... '. fjs parent node insertBefore (js, fis);} (document,' script ',' facebook-jssdk ')); Right you guys, I need some help. The pictures of the chap I've posted are my late Uncle Tom who passed away last week... Posted by Tony Budgett on Wednesday, November 4th, 2015
NEW