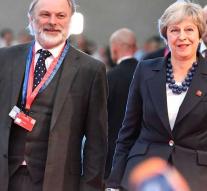 salzburg - There is no shot in the negotiations about the brexit and the border between the (British) Northern Ireland and Ireland. That is what the Heads of Government of Lithuania and Slovakia say after dinner between the European heads of government on the eve of the EU summit in Salzburg.

The British Prime Minister Theresa May gave a speech during that dinner about the decision of Great Britain to leave the EU next year. According to a British government source, May would appeal to her European colleagues to drop the 'unacceptable' Brexit requirements that could tear up the country.

'At the moment it is stuck. There is no progress, 'said Lithuanian President Dalia Grybauskaite after dinner. 'There is no progress in the border issue. We will see what comes out of the discussion between the 27 countries ', said Peter Pellegrini, the Prime Minister of Slovakia.

May would have asked at dinner if the EU colleagues would like to look at her proposals with benevolence. 'We will not, of course, agree on every detail, but I hope that you are willing to respond,' she said, according to the source of government. 'It is now up to us all to prove that we can conclude this agreement. '

Earlier in the day it became known that the British prime minister himself will be present at an extra summit in mid-November about the brexit. This summit must remove the last stumbling blocks for a departure from the EU at the end of March 2019. The biggest obstacle is the border between (the British) Northern Ireland and Ireland. After the brexit, they have to be checked again, which hardly anyone wants.