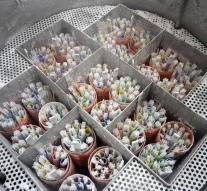 arnhem - Rijnstate Hospital in Arnhem does not need to survey five thousand patient records of children to investigate whether they have the same donor father. That judged the court of Gelderland on Monday. The donor and a woman who has two children who have been raised with the donor's seed, had a case against the hospital.

They wanted those experts to investigate how many children are exactly the donor's seed. It has been found that the hospital's administration was not correct and at least 37 offspring were raised. According to the law, there may be no more than twenty five. However, the court sees 'serious objections', inter alia under the privacy act.