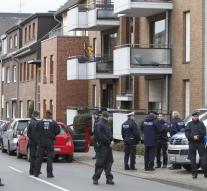 - Between the arrest of seven suspects Tuesday in the German Alsdorf and the attacks in Paris, is not directly related. That made the German Interior Minister Thomas de Maiziere on Tuesday. " As was previously the case, there is at least one perpetrator on the run. There is concern that this perpetrator flight to neighboring countries," said the minister.

Alsdorf, near the border with the Netherlands, arresting special units of the police Tuesday a total of seven people. Earlier in the day, police said yet : " We have received indications that one of the most wanted by Paris is possibly associated with stops in our area. "

According to de Maizière, the threat of a terrorist attack in Germany at present " major ".