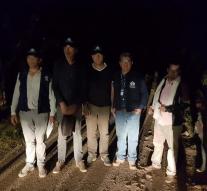 hilversum - For the release of Derk Bolt and Eugenio Follender, no ransom is paid. That's what editor Edward Paul Vertegaal of the Spoorloos program said on Saturday at NPO Radio 4.

'It has not been a requirement either. They were abducted by accident. There was no basis for any plan. It looks like they were in the wrong place last week. '

Bolt and Follender were released into the jungle, and according to Vertegaal they are now on their way to the inhabited world.