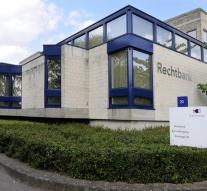 breda - Bredanaar Grad D., who threatened on April 13, members of a SWAT team with a pistol and a revolver in hand, will not receive a penalty. The court in Breda believes D. thought he was robbed by criminals, because he could not see that it was a SWAT team.

D. was shot itself and therefore was seriously injured. The officers were afraid he would shoot. They had just come to his house on the trailer to the Pietersberg because they suspected him of firearm possession. Before that, he did get a half cell, half suspended.