Home / World / No pity for protest movement from Reef 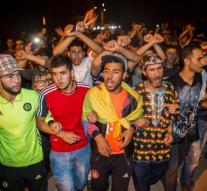 rabat - The Moroccan king Mohammed VI did not give grace to members of the protest movement from the northern Reef, the Hirak, who were imprisoned this weekend. Moroccan media reported that 562 prisoners will receive grace or punishment this year on the occasion of Eid al-Fitr, the end of the fasting month's party.

But rumors that the king seizes the party to release prisoners from the Hirak (Movement) proves incorrect. Nobody of the protest movement is on the list of prisoners who benefit from the annual grace.

The Hirak arresters come from al-Hoceima and nearby Imzouren. The leader, Nasser Zafzafi, was arrested at the end of May. Dozens of these detainees would be accused of very serious crimes such as committing an 'attack on internal security'. It has been unrestrained in the poor and historically troubled region, where Berbers mostly live.