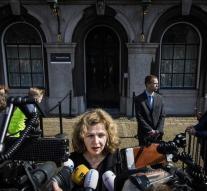 the hague - The four negotiating parties do not want to give openness about the progress of the formation. The rest of the Lower House asked about it.

Among others, PVV foreman Wilders asked for more openness. He asked how long it was time for land management to be 'on his way'. 'Well, I do not know what's worse: a delegation cabinet or a cabinet with GroenLinks?'

Negotiator and CDA leader Buma replied that it would be 'not useful' to give openness about progress. That could be at the end of the process. Premier Rutte supported him, like GL and D66. According to Rutte, the likelihood that they are getting out will be smaller if they make public progress.

Chamber President Arib goes to informer Schippers that part of the Chamber wants openness. She can then send a letter with at least some information. But given the attitude of the four parties, that info will be limited.

The attitude led to irritation with other parties. In the current system there would be more transparency, but according to the SP, there seems to be little scope for it. Party leader Roemer called to D66 foreman Pechtold: 'This way you can put the formation process back to the king as well.'