Home / World / No one is this year's summit Everest 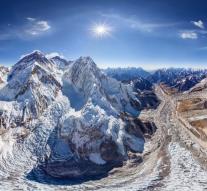 kathmandu - The summit of Mount Everest for the first time in a long time achieved by anyone. A 33 -year-old Japanese man who made ​​a desperate attempt to climb the mountain , Sunday return empty-handed to the Nepalese capital Kathmandu. Since no other climbers have registered for the rest of the year , the top is first removed by anyone since 1974 .

The 33 -year-old Japanese Nobukazu Kuriki trying for the sixth time to reach the top . He left twice from the base camp, but had to because of deep snow and strong winds back again. Kuriki During previous ascents of the world's highest mountain (8848 meters) lost nine fingers.

All he wanted and no oxygen to "the roof of the wereld". Kuriki has announced no attempt to do more, tour organizer Tiku Gurung reported Saturday. After the severe earthquake that hit Nepal in April, were all the other climbs canceled.