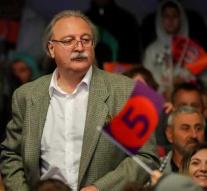 tbilisi - The presidential election in Georgia on Sunday did not produce a winner in the first round. None of the candidates achieved more than 50 percent of the votes. This is reported by the central electoral commission of the country now that 100 percent of the votes have been counted.

The second and final round of the elections is between the French-born diplomat Salome Zoerabisjvili, who obtained 38.7 percent of the votes, and the former foreign minister Grigol Vasjadze, who got 37.7 percent of the voters behind him. 25 candidates took part in the Sunday election.