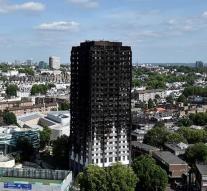 london - The number of deaths in a residential tower in London is unlikely to increase, according to the police. The search for victims has been completed. By the fire in mid-June 81 people died.

The police assume that at the time of the disaster, 350 people lived in the Grenfell Tower. 255 residents were able to save themselves from the burning building, fourteen people were not at home.

In the meanwhile, all identifiable human remains have been removed from the building. Of the 81 dead or missing, the researchers have formally identified 32 bodies. As a result of the heat during the fire, a number of victims will never be identified.

The fire was created on one of the lower floors by a broken refrigerator. Whether anyone can be held responsible for this is still unclear.