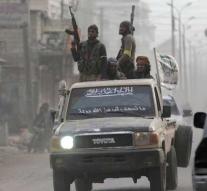 amman - Syrian rebels in south-west Syria do not have to rely on US military support in their fight against the Syrian army that is trying to regain ground with the help of Russia. This is evidenced by a message that the US military has issued to leaders of the Free Syrian Army (FSA).

The hope among the rebels that Washington would give support again was fueled by other messages. The US warned Syrian President Bashar al-Assad and his Russian allies not to engage in any activities in the so-called de-escalation zone agreed upon by America and Russia. Infringement could have 'serious consequences'.

But the last message sounds very different. The rebels have been given to understand that they must decide for themselves how to resist the Syrian offensive. The US has previously supported the FSA with weapons and millions of dollars. According to military observers, America suspended the aid after President Donald Trump abolished the program.