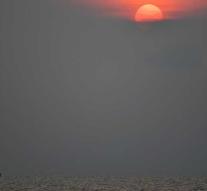 jakarta - The Indonesian authorities no longer receive a signal from the cockpit voice recorder of the crashed airliner of Lion Air. Nevertheless, the search for the so-called black box continues, the head of the committee responsible for transport safety (KNKT) said before the parliament.

The almost new Boeing 737 MAX 8 crashed at the end of October shortly after taking off in the Java Sea. All 189 occupants were killed. The authorities have recovered one of the two black boxes from the aircraft. The flight data is stored in this so-called flight data recorder.