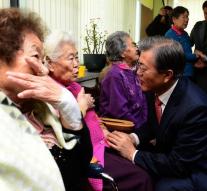 - Japan does not give exemplary damages to South Korean women who were sexually before and during World War abused by Japanese soldiers. The two countries reached there a few days ago an agreement, but Japan does not pay yet.


The problem for Tokyo is a statue since 2011 right in front of the Japanese Embassy in Seoul condition. The bronze statue is a monument to all the so-called comfort women. It shows a girl on a chair with an empty seat next to her, a tribute to all the victims who are deceased while they waited for Japanese apology.
Japan will only pay if the image is removed, leaving a government source in Tokyo Thursday to know state news agency Kyodo.
The Korean peninsula between 1910 and 1945 in Japanese hands. Japan offered in 1993 to apologize, but that did not go far enough for many. Japan on Monday expressed regret.
NEW