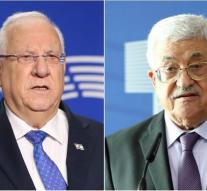 brussels - Attempts by the European Parliament to bring together the presidents of Israel and Palestine in a meeting in Brussels have failed Thursday. According to Israeli President Reuven Rivlin refused to go into Palestinian President Mahmoud Abbas on the invitation. EU foreign policy chief Frederica Mogherini did not comment on it.

Both Rivlin and Abbas held this week a speech at the European Parliament. According to Rivlin, the two state solution which Europe stands no chance of success. Direct dialogue between Israel and the Palstijnen according to him the only way to build trust.

Abbas welcomed the recent French initiative to relaunch the talks on peace in it. He suggested that Israel his country has turned into an open air prison.


Israel suspended last year contacts with EU institutions involved in the negotiations because of the decision to products from certain Jewish settlements should be mentioned that they come from occupied territory.