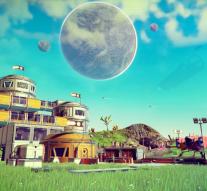 - One year after the launch of No Man's Sky, players have something to do with the update 1.3. For example, there's a new campaign to put your teeth on, giving you 30 hours of fun. Even a very limited multiplayer has been added.

When you are investigating a planet, you can also see which players are present at that moment. You can see up to 16 players like a glowing ball floating around. Not very exciting but you can talk to each other through the chat system.

But maybe we can expect more from the multiplayer in the future. 'While the interaction with others is still limited, it is an important first step in the world of co-op for No Man's Sky,' said developer HelloGames.