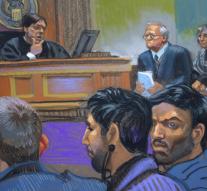 - The two families of Venezuelan President Nicolas Maduro this week have been arrested for drug trafficking and transferred to the US, do not enjoy diplomatic immunity. That said a spokesman for the US State Department Friday.

According to the spokesman, the indictment against two cousins ​​of Maduro 's wife " strictly a matter of law, " and there has been about contact with the Venezuelan consul general. " We do not believe that these people are diplomatic immunity ", the spokesman said.

The 30-year-old Franqui Francisco Flores de Freitas and the 29-year-old Efrain Antonio Campo Flores, according to the US Department of Justice involved in the transport of drugs from Venezuela through Honduras to the United States. The United States announced earlier this year that the duo was suspected and it had begun an investigation. Actual detained and brought before a judge in New York, was undermined by Venezuela as " an imperialist attack ".