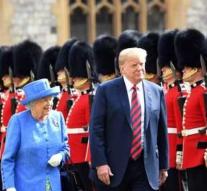 - President Donald Trump had to make it Friday when he visited Great Britain without a ride in a golden carriage through the heart of London to Buckingham Palace. The American president would have dreamed of that after Prime Minister Theresa May had invited him on behalf of Queen Elizabeth for a state visit shortly after taking office. Instead of a triumphal procession Trump was driven to Windsor Castle for a modest welcome in the castle and 'tea' with the Queen.

Indeed, because of all the protests in the British society, it has not come about since the state visit wanted by May. Trump is therefore on an official visit and is missing a lot of the frills that go with a state visit. A dinner with the queen was not included, but Elizabeth had to receive him and also had an honor guard. Outside the castle was a handful of demonstrators who spoke shame of the visit.

British media had reminded over the past few days that the Queen had visited more unpleasant gentlemen, such as Syrian President Assad and Romanian dictator Ceausescu. Prior to the reception at Windsor Castle, Trump had made some nice comments about the Queen in an interview with tabloid The Sun, for whom he has great respect. Town and Country Magazine recalled on Friday that the president has said less flattering things about other members of the royal family in the past.

From Princess Diana, for example, whom he met in New York, he said that he would have been able to get her into bed. Catherine criticized him for making naked pictures of her. 'Kate Middleton is great, but she should not sunbathe naked. She owes it to herself. Who would not take pictures of her now and make a lot of money if she sews naked? Come on Kate! ', Tweeted Trump in 2012.

Whether those remarks were discussed during the meeting, where Melania Trump was also present, is not known.