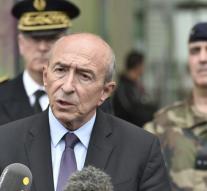 paris - According to the French Interior Minister Gérard Collomb, no French perpetrators are involved in the attacks in Barcelona and Cambrils.

'At one point there was a question that French had taken part in this assessment. We have reviewed all the files, but no person matches the previously known individuals. This has to be confirmed. '

Last night the name of Driss Oukabir, whose identity papers were found in the van with an attack on Las Ramblas, went round. Presumably, these were stolen by his younger brother Moussa to put the police on a false track. Moussa is still fleeing.

Driss Oukabir is Moroccan and lived in Marseille for several years. Then he left for Spain, where he got a residence permit. According to Belgian media, the 28-year-old is not unknown to the police: he has been stuck for violence for some time and released in 2012.