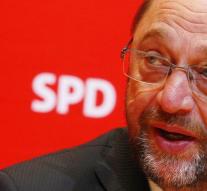 brussels - There are no indications that Martin Schulz has frauded in his time as President of the European Parliament. The European Anti-Fraud Office OLAF therefore does not investigate the German Chancellor's SPD candidate, told a spokesperson on Thursday.

The service earlier this year launched a preliminary investigation after allegations that 61-year-old Schulz had promoted employees between 2012 and early this year and erroneously paid out bonuses. For example, Markus Engels, Schulz's current campaign leader in Germany, would have been generously compensated for trips with private jets. However, irregularities did not detect OLAF.

The preliminary investigation took place after the Chairman of the Budgetary Control Commission of the European Parliament, Ingeborg Grässle, had taken the bell. She is a party mate of Chancellor Angela Merkel. Parliament will also decide on the issue on Thursday.