Home / World / No flights kogalymavia with Airbus A321 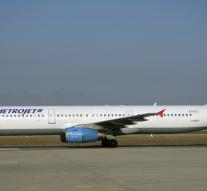 moscow - The Russian aviation authorities have shut down according to Interfax news agency Sunday flights of the charter company Kogalimavia with aircraft of the type Airbus A321. Such a device is Saturday crashed in northeastern Egypt. All 224 passengers lost their lives.

It is not clear what caused the crash. The Airbus A321 in 1997 made ​​almost 21 000 flights. The Russian plane suddenly dropped straight down and would have sent no distress signal.

The unit would have had technical problems and came down in a part of the Sinai where jihadists are active for years. Lufthansa, Air France-KLM and Emirates have indicated to avoid Sinai clarified to the crash.

The Russian Transport Minister Maxim Sokolov, with a team of researchers arrived in Cairo.