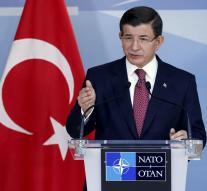 brussels - Turkey will not apologize to Russia for shooting down a Russian fighter at the Turkish- Syrian border. That made the Turkish Prime Minister Ahmet Davutoglu clearly Monday in Brussels during a visit to NATO.

" No country can ask of us apologize for doing our duty ", he said. " This is the Turkish- Syrian border, in no other country ", the premier added.

Tensions between Turkey and Russia have risen very high after last week a Russian aircraft was shot down by the Turks. They claim that the Russian plane after fifty warnings remained in Turkish airspace. Russia denies this and called the downing of the device a provocation and therefore requires excuses.

Defending Turkish airspace is " a right, a duty " Davutoglu said. He hopes that Russia will reconsider the announced economic sanctions.