Home / World / 'No evidence of chemical weapons in Mosul ' 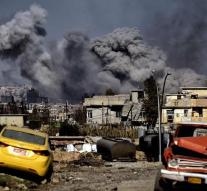 new york - Iraq's UN Ambassador Mohamed Ali Alhakim on Friday said that no evidence has been found Islamic State has used chemical weapons in defense of Mosul. The terrorist organization is besieged in the city by Iraqi forces with US support.

Alhakim said he had spoken with government officials in Baghdad who have investigated the accusation. 'There was really no find any indication that IS has used chemical weapons. 'The United Nations said last Saturday that doctors from the Red Cross since March 1 Twelve people, including women and children, are being treated for possible exposure to chemical agents.

According to the US have the jihadists on mustard gas.