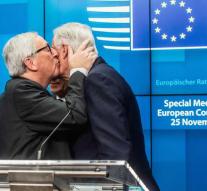 brussels - The European population will not have the chance to speak out in a referendum about the Brexit. The European Commission has rejected a citizens' initiative that calls for an EU-wide plebiscite because it falls outside its competence.

If the proposal had been approved, the promoters would have had to collect the signature of 1 million Europeans from at least 7 Member States in order to put the plan on the agenda. Whether a European referendum would make a difference is doubtful, since the United Kingdom will leave the EU on 30 March next year.