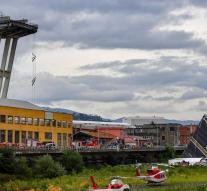 genoa - At the brigade in the Italian city of Genoa, no Dutch people are involved. The Ministry of Foreign Affairs reports this Wednesday.

The Dutch embassy in Rome and the Consulate General in Milan are in contact with the Italian authorities. Dutch people who are in the region and need help can contact a special telephone number: +31 247 247 247.

The death toll of the partial collapse of the traffic bridge in Genoa is now 35, but that number may still rise. The traffic bridge collapsed partly during heavy weather on Tuesday. Brokken concrete and vehicles fell on the city. The local authorities say that several dozen cars and three trucks drove across the bridge at the time of the disaster.