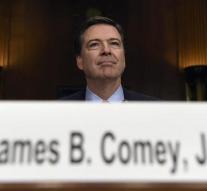 washington - US Vice President Mike Pence stressed Wednesday that there is no correlation between the resignation of FBI topman James Comey and the investigation into possible Russian interference in the US presidential elections of 2016. Pence said Comey's lane was sent for the trust of the Americans in the FBI rescue department.

Pence said that President Donald Trump showed in the 'Comey' issue, 'Leading leadership', in the interests of the security of Americans.