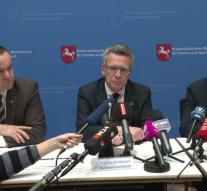 hannover - The German Interior Minister Thomas de Maiziere wanted at a press conference Tuesday not say what exactly was the threat of terror that led to the cancellation of the friendly match Germany- Netherlands in Hanover. De Maiziere did not give details in the interests of national security. The Lower Saxony Interior Minister Pistorius spoke to that explosives were found at the stadium.

The minister acknowledged that the cancellation came late, but that it was not possible to cancel the exhibition game earlier. De Maiziere early understanding.

According to reports in the German media is in the vicinity of the stadium found a car bomb, which looked like an ambulance. The police nor the Minister will confirm that.