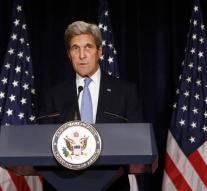 - Russia and the United States have failed on Thursday (local time) to revive the truce in Syria new life. That turned out after a meeting of International Support Group for Syria (ISSG) in New York.

US Secretary John Kerry (Foreign Affairs) afterwards said Washington is not the only party that can hang up the door for peace. ' If the Russians come up with constructive proposals, we will listen, '' Kerry said.

The UN special envoy to Syria, Staffan de Mistura, the meeting designated ' long, painful and disappointing. '' The diplomat said they would like to believe that Moscow and Washington sincerely trying to reach a peace agreement.