Home / World / No asylum for Yemenis on Korean island 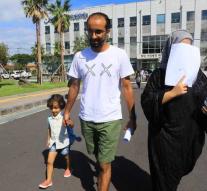 seoul - The South Korean authorities have rejected the asylum application from hundreds of Yemeni asylum seekers. They had traveled to the popular Jeju island because they could go there without a visa. That measure was actually intended to attract more vacationers.

This year 481 Yemenites applied for asylum after they arrived in Jeju, news agency Yonhap reported. The Ministry of Justice announced on Wednesday that 339 of those asylum seekers do not receive refugee status, but that they can remain temporarily in the country on humanitarian grounds. Another 34 Yemenis are completely out of the boat. No decision has yet been taken on dozens of other applications.

The arrival of the refugees led to resistance among the South Korean population. Some opponents feared more crime and other social problems. Others were afraid that more Yemenis would follow. Yemen has been in the grip of a bloody civil war for years.