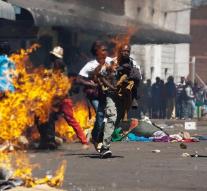 harare - Opponents of Zimbabwean President Robert Mugabe should not hope for an Arab Spring. Mugabe can not be deposited as president. He said Friday after the most violent protests against his rule in two decades.

ZRP continued in the capital, Harare tear gas against opposition demonstrators. However, they had permission from the court for their demonstration.

increasing protests heard in Zimbabwe against the 92-year-old president's policies. The country is suffering from economic malaise, lack of money and high unemployment. Mugabe has since left the country, he went to Kenya for a conference on African development.


The term Arab Spring is a series of protests and revolutions in countries like Tunisia, Egypt and Libya.