Home / World / No appeal against acquittal of Infanta Cristina 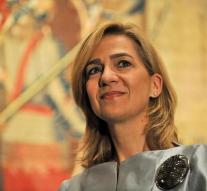 palma - Spanish Princess Infanta Cristina was last week acquitted of tax evasion. This acquittal is final, there will not be appealed to the Supreme Court. The lawyer of the 'Manos Limpias' Virginia Lopez Negrete, the only organization that persecuted the Spanish princess, has offered her resignation to the Court of Palma and set out its duties in this case. She is also today not to attend the hearing, which will decide on the fate of the ex-Duke of Palma 'Inaki Urdangarin, the brother of the Spanish king.

Virginia Lopez says to do this because of personal motives. She speaks of an 'absolute loss of confidence in the customer with whom there are many insurmountable disagreements. 'She is referring to the fact that the President of Manos Limpias, Miguel Bernad, during the trial itself ended up behind bars for attempted extortion. Virginia Lopez made himself into then all loose Manos Limpias, but since Manos Limpias of the earth seems to have disappeared and can be reached (the phone and email account are canceled) Lopez will not pursue further the matter it means for the sister of the king of Spain that one horror scenario in any case has been finally past:. the possibility that they themselves behind bars would end.

This morning will show whether her husband, Inaki Urdangarin, in the short term has been awarded the same liberty pending his appeal. The hearing on his fate has already begun behind closed doors. The former Duke of Palma arrived in a black car. When he got out, sounded loud shouting. He declined to comment, and just hurled his black backpack over his shoulder as he entered the court.