Home / World / No aid to Nigeria after attack 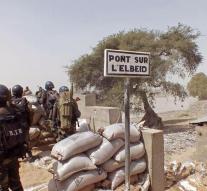 - The United Nations has temporarily suspended the delivery of aid to the province of Borno in northeastern Nigeria. This has been decided after a humanitarian convoy Thursday on the way back from a mission was attacked. According to UNICEF, two people were injured. They lie in a hospital.

It is unclear from which circuits are the perpetrators. The area was long a stronghold of the terrorist organization Boko Haram. MSF is very concerned. Borno threaten large numbers of children dying of malnutrition. Stocks are running low.