Home / World / No agreement with Air France with pilots 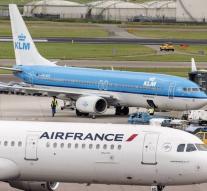 paris - Air France has also failed to reach agreement with the pilots over the company's future plans after five months of talks. Negotiations have recently been terminated without agreement being reached.

Part of the plans of KLM's French sister company is the creation of a new subsidiary, which has to deal with cheaper cabin crew with competitors from the Middle East.

However, that project can only continue with the support of the pilots, the most influential professional group within each airline.

One of the focal points would still be the so-called production balance within Air France-KLM. KLM has continued its flight offer recently, while Air France is only in place as long as staff has not agreed to further cost savings. The pilots demand that this be retracted.