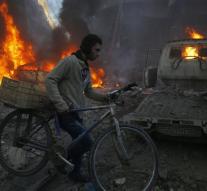 - Russia has complained Thursday that there is still no agreement on who can participate in the peace talks on Syria. The powers that want to keep the discussions still have not determined who rebels of the opposition in the Syrian civil war and who the terrorists are. The latter may not come to the negotiating table.

MOSCOWThe Russian Foreign Ministry showed Thursday that it is regrettable that it takes so long to draw up the lists. Russia, the United States and the United Nations in Geneva consultations Friday on the situation in Syria and the planned peace conference.
NEW