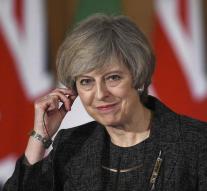 london - British Prime Minister Theresa May appears to have lost her majority in the British parliament. Her Conservative Party remains the largest with 314 seats, but lacks an absolute majority. This is evidenced by a joint exit poll from BBC, ITV and Sky.

Labor stands at 266 seats, the Scottish nationalists seem to drop to 34 seats, the Liberal Democrats stand at fourteen seats.

The Conservative Party would find it difficult to form a government, so the exit poll seems to be correct. That would be a big setback for May.