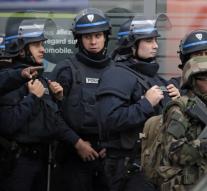 brussels - In Brussels Tuesday appears to have been a ninth suspect arrested for involvement in the attacks in Paris. The Belgian judicial authorities have confirmed this on Thursday after media reports.

What role the accused played is not yet clear. It is known only that this man after the attacks was called by the niece of Abdelhamid Abaaoud, the mastermind behind the terrorist violence of November 13th. Hasna niece also was involved in the attacks.

Abaaoud was slain in a police operation in the apartment of Hasna in Saint-Denis, a suburb of Paris. The woman committed suicide with a bomvest.